Refugees and Immigrants: Their Experience and Contribution to Psychoanalysis in North America - Virtual Roundtable #2 (Live) 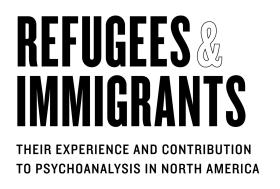 Refugees and Immigrants: Their Experience and Contribution to Psychoanalysis in North America - Virtual Roundtable #2 (Live)

This roundtable will discuss the history of forced migration of psychoanalysts from Europe and their impact on psychoanalysis in America. Beginning in the 1920s and again between 1938 and 1940, the rise of fascism and its attendant antisemitism led most Central European psychoanalysts to emigrate to other countries. Their contributions fundamentally reshaped the field of psychoanalysis in the United States and England. In this roundtable, scholars will discuss the historical experience of analysts who were forced to leave Europe, and the integration of those individuals and their psychoanalytic theories into American psychoanalytic institutes.

Moderator:  Thomas Kohut, PhD is currently Sue and Edgar Wachenheim III Professor of History at Williams College in Williamstown, Massachusetts. He received a BA from Oberlin College and a PhD in history from the University of Minnesota.  He is also a graduate of the Cincinnati Psychoanalytic Institute. Dr. Kohut is a member of the Board of Trustees of the Austen Riggs Center in Stockbridge, Massachusetts and of the Council of Scholars at the Erik Erikson Institute at Austen Riggs. He is also the president of the Freud Foundation, US.  From 2000 to 2006, Kohut served as Dean of the Faculty at Williams College. Dr. Kohut has written three books: Empathy and the Historical Understanding of the Human Past (New York: Routledge, 2020); A German Generation: An Experiential History of the Twentieth Century (New Haven: Yale University Press; 2012); Wilhelm II and the Germans: A Study in Leadership (New York: Oxford University Press, 1991). He has also published articles on a number of historical and psychological topics: including the German humorist, Wilhelm Busch; letters from German soldiers at Stalingrad; and psychohistory, history, and psychoanalysis.

Adrienne Harris, PhD is Faculty and Supervisor at New York University Postdoctoral Program in Psychotherapy and Psychoanalysis. She is on the faculty and is a supervisor at the Psychoanalytic Institute of Northern California. She is a member and Training Analyst in the IPA. She is an Editor at Psychoanalytic Dialogues, and Studies In Gender and Sexuality.

Louis Rose, PhD is Executive Director of the Sigmund Freud Archives and Professor emeritus of modern European history at Otterbein University.  He received his B.A. in History from Clark University and his Ph.D. in History from Princeton University.  His book  Psychology, Art, and Antifascism: Ernst Kris, E. H. Gombrich, and the Politics of Caricature (Yale, 2016) has appeared in Chinese translation (Guangxi Fine Arts, 2022).  His first book, The Freudian Calling: Early Viennese Psychoanalysis and the Pursuit of Cultural Science (Wayne State, 1998), received the 1999 Austrian Cultural Institute Prize for Best Book in Austrian Studies.  His publications include The Survival of Images: Art Historians, Psychoanalysts, and the Ancients (Wayne State, 2001).  From 2011-2018, he was Editor of the interdisciplinary psychoanalytic journal American Imago.  In 2017, he was awarded Honorary Membership in the American Psychoanalytic Association.

Judy Kantrowitz, PhD is a training and supervising analyst at the Boston Psychoanalytic Institute and formerly a Clinical Associate Professor         (now called a corresponding member )at Harvard Medical School,. She is the author of four books, The Patient's Impact on the Analyst ; Writing about Patients: responsibilities, risks, and ramifications) and  Myths of Termination: what patients can teach analyst about endings  and The Role of Patient -Analyst Match in the Process and  Outcome of Psychoanalysis.  She has served three times on the Editorial of the  Journal of American Psychoanalysis   and won their  paper prize for 2020. She  is currently on the board of The Psychoanalytic Quarterly.  She is in private practice of psychoanalysis and psychoanalytic psychotherapy in Brookline, MA.

Elizabeth Lunbeck, PhD is a historian of the human sciences, specializing in the history of psychoanalysis, psychiatry, and psychology.  Throughout her career, she has been interested in the conceptual foundations of these disciplines as well as in the social and cultural contexts in which they have taken shape and in the critical role they have played in the making of modernity and the modern self.  Her first book, The Psychiatric Persuasion:  Knowledge, Gender, and Power in Modern America (1994), examines psychiatry’s transformation from a marginalized, asylum-based specialty to a thriving—if contested—discipline endowed with clinical and cultural authority over not only insanity but also normality, as focused on normal persons as on the insane.