Refugees and Immigrants: Their Experience and Contribution to Psychoanalysis in North America - Virtual Roundtable #1 (Live) 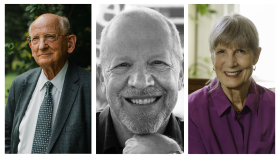 Refugees and Immigrants: Their Experience and Contribution to Psychoanalysis in North America - Virtual Roundtable #1 (Live)

"After Vienna: A conversation with Otto Kernberg, MD, and Thomas Kohut, PhD"

The opening roundtable examines the experiences two prominent psychoanalysts, Otto Kernberg and Heinz Kohut who were forced to emigrate from Vienna as the Holocaust approached. Dr. Kernberg will speak about his life and career considering his emigration experience, and Tom Kohut, PhD, will speak about how the emigration experience of his father Heinz Kohut influenced his personal and professional life and work. How both men have shaped American psychoanalysis will be examined. This discussion will be moderated by Nancy McWilliams, PhD.

Otto Kernberg, MD - Dr. Kernberg is past-president of the International Psychoanalytic Association. In the past, Dr. Kernberg served as director of the C.F. Menninger Memorial Hospital, supervising and training analyst of the Topeka Institute for Psychoanalysis, and director of the Psychotherapy Research Project of the Menninger Foundation. Later, he was director of the General Clinical Service of the New York State Psychiatric Institute, and professor of clinical psychiatry at the College of Physicians and Surgeons of Columbia University.

From 1976 to 1995 he was associate chairman and medical director of The New York Hospital Cornell Medical Center, Westchester Division. Dr. Kernberg was the book editor of the Journal of the American Psychoanalytic Association from 1977-1993. He has received numerous awards for his excellence in psychiatry. He is also the author of 12 books and co-author of 11 others.

Thomas Kohut, PhD - Dr. Kohut is currently Sue and Edgar Wachenheim III Professor of History at Williams College in Williamstown, Massachusetts. He received a BA from Oberlin College and a PhD in history from the University of Minnesota.  He is also a graduate of the Cincinnati Psychoanalytic Institute. Dr. Kohut was a member of the Board of Trustees of the Austen Riggs Center in Stockbridge, Massachusetts and is a member of the Council of Scholars at the Erik Erikson Institute at Austen Riggs. He is also the president of the Freud Foundation, US.  From 2000 to 2006, Kohut served as Dean of the Faculty at Williams College. Dr. Kohut has written three books: Empathy and the Historical Understanding of the Human Past (New York: Routledge, 2020); A German Generation: An Experiential History of the Twentieth Century (New Haven: Yale University Press; 2012); Wilhelm II and the Germans: A Study in Leadership (New York: Oxford University Press, 1991). He has also published articles on a number of historical and psychological topics: including the German humorist, Wilhelm Busch; letters from German soldiers at Stalingrad; and psychohistory, history, and psychoanalysis.

Moderator: Nancy McWilliams, PhD - Dr. McWilliams teaches at Rutgers University’s Graduate School of Applied & Professional Psychology and practices in Lambertville, New Jersey. She is author of Psychoanalytic Diagnosis (1994, rev. ed. 2011), Psychoanalytic Case Formulation (1999), Psychoanalytic Psychotherapy (2004), and Psychoanalytic Supervision (2021) and is associate editor of both editions of the Psychodynamic Diagnostic Manual (2006, 2017). A former president of Division 39 (Psychoanalysis) of the American Psychological Association, she has been featured in three APA videos of master clinicians. She is on the Board of Trustees of the Austen Riggs Center. Her books are available in 20 languages; she lectures widely both nationally and internationally.

Cost:
$0.00
Please login or register to take this course.

Please register here on the Ethos site. You will receive email reminders from Ethos.

In order to receive credit, you must return to this page to access the course by clicking on "Pending Activities" then "Take Course" and then navigating to the Zoom Webinar, clicking "Start" and "Click to Join Webinar"