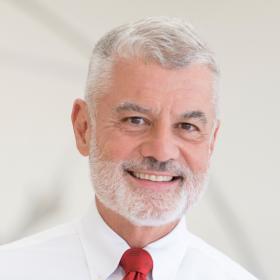 Addiction to alcohol, tobacco, cocaine, crystal methamphetamine, benzodiazepines, cannabis, and opioids can be devastating, as we all know. But video games, online porn, internet gaming, internet gambling, and other technological addictions can be every bit as addictive as substances. These addictions can have real-world ramifications and lead to the loss of jobs, money, and loved ones. As technology becomes integrated into every facet of modern life, these technological addictions are becoming increasingly prevalent. This session will inform healthcare professionals about the addictive potential of technology and help them view these addictions as legitimate psychiatric conditions worthy of medical assessment, diagnosis, and treatment.

Petros Levounis, MD, MA, serves as professor and chair of the Department of Psychiatry and associate dean for professional development at Rutgers New Jersey Medical School. He is also the chief of service at University Hospital in Newark, New Jersey, and president-elect of the American Psychiatric Association. Dr. Levounis came to Rutgers from Columbia University where he served as director of the Addiction Institute of New York from 2002 to 2013.

Dr. Levounis is a Phi Beta Kappa graduate of Stanford University where he studied chemistry and biophysics before receiving his medical education at Stanford University School of Medicine and the Medical College of Pennsylvania. During medical school, he researched the effects of social class on patient-physician relationships in Oxford, England, and received an MA degree in sociology from Stanford. In 1994, he moved to New York City to train in psychiatry at the New York State Psychiatric Institute of Columbia University. He graduated from Columbia earning the National Institute of Mental Health Outstanding Resident Award and went on to complete his fellowship in addiction psychiatry at New York University.

Dr. Levounis has written numerous articles, monographs, and book chapters; has lectured extensively on addiction topics throughout the United States and abroad; and has been interviewed by CBS, ABC, NBC, CNN, FOX, The Martha Stewart Radio Show, The New York Times, and The Washington Post, among others.

Dr. Levounis has published fourteen books including the self-help paperback Sober Siblings: How to Help Your Alcoholic Brother or Sister—and Not Lose Yourself, the textbook of Substance Dependence and Co-Occurring Psychiatric Disorders, Motivational Interviewing for Clinical Practice, The Behavioral Addictions, Becoming Mindful, LGBTQ Mental Health: The Spectrum of Gender and Sexuality, Office-Based Buprenorphine Treatment of Opioid Use Disorder, now in its second edition, and Technological Addictions. Dr. Levounis is currently working on the first textbook of Nature Therapy, which is going to be available in 2023. His books have been translated into French, German, Hungarian, Japanese, Portuguese, and Spanish.

Austen Riggs Center Inc. confirms that Petros Levounis, MD, MA,, nor anyone involved in the planning of the CME event, has disclosed a potential conflict of interest.

The Austen Riggs Center designates this enduring course for a maximum of (see specific event) AMA PRA Category1 Credit(s) ™. Physicians should claim only the credit commensurate with the extent of their participation in the activity.

The Austen Riggs Center Inc. is accredited by the Massachusetts Medical Society to provide continuing medical education for physicians.

Austen Riggs Center, Inc. is recognized by the New York State Education Department’s State Board for Psychology as an approved provider of continuing education for licensed psychologists #PSY-0115.

The Austen Riggs Center Inc. is approved by the American Psychological Association to sponsor continuing education for psychologists. The Austen Riggs Center maintains responsibility for the program and its content. For additional information about this program, please call the Erikson Institute Education Coordinator, at 413.931.5230.

For a listing of jurisdictions that accept ACE, please visit www.aswb.org/ace/ace-jurisdiction-map/.

The Austen Riggs Center Inc. is approved as a provider for social work continuing education by the Association of Social Work Boards (ASWB) www.aswb.org, through the Approved Continuing Education (ACE) program. As of January 2021, ACE is accepted in 48 jurisdictions. This does not include the states of New York and New Jersey. Check your state licensing board for further information. For a listing of jurisdictions that accept ACE, please visit www.aswb.org/ace/ace-jurisdiction-map/ or check with your state guild and licensing entities.

Cost:
$0.00
Please login or register to take this course.

Requirements for course completion include: registering for the event, attending the entire session,

The Austen Riggs Center Continuing Medical Education and Online Courses system is offered to users who are able to access these courses with systems and devices meeting the following requirements: