Home » What Obstructs Addressing the Climate...

What Obstructs Addressing the Climate Emergency? 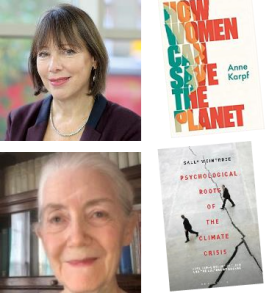 What Obstructs Addressing the Climate Emergency?

What Obstructs Addressing the Climate Emergency?
Anne Karpf and Sally Weintrobe discuss the role of gender and of exceptionalism

In this virtual event, Sally Weintrobe and Anne Karpf will discuss their recent books, moderated by Maureen Katz. Karpf’s How Women Can Save the Planet  and Weintrobe’s Psychological Roots of the Climate Crisis: Neoliberal Exceptionalism and the Culture of Uncare provide new and interesting lenses through which to view the climate crisis, and the conversation will bring together ideas from psychoanalysis and sociology to bear on current issues. This virtual event is free and open to the public and does not offer any continuing education credit.

Anne Karpf is a writer, sociologist and award-winning journalist. Her five books of nonfiction include a family memoir, The War After: Living with the Holocaust (Faber), and most recently How Women Can Save the Planet (Hurst). She has a special interest in psychoanalysis; her research into Winnicott’s BBC radio broadcasts was funded by the Winnicott Trust. She is Professor of Life Writing and Culture at London Metropolitan University.

Sally Weintrobe is a Fellow of the British Psychoanalytical Society and she chairs the International Psychoanalytical Association’s Climate Committee. She edited and contributed to Engaging with Climate Change: Psychoanalytic and Interdisciplinary Perspectives (Routledge, 2012) and the New Library of Psychoanalysis, which was short-listed in 2014 for the Gradiva Award for contributions to psychoanalysis. She recently published Psychological Roots of the Climate Crisis: Neoliberal Exceptionalism and the Culture of Uncare (Bloomsbury, 2021).